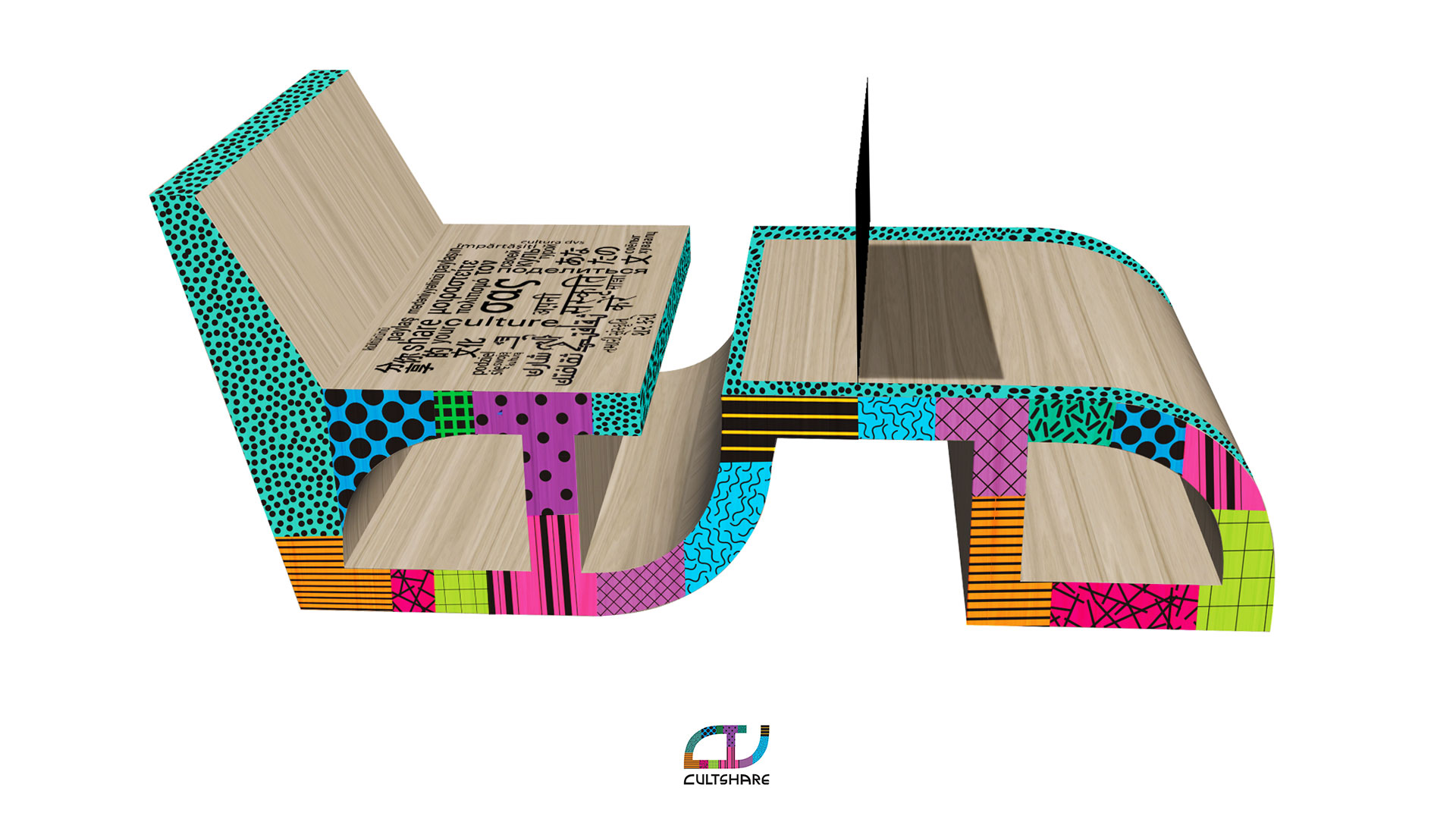 Cultshare is a social design project. On the unique graphical chair ‘Cultshare’, there is NO PLACE for typography phobia, illusory superiority, Xenophobia, and racism. What you have to do is simply sitting, watching, talking to your random neighbor, and sharing your culture with him or her; in other words, making more cultural communication with each other.
Two random persons are going to sit on Cultshare and to watch my video which will give them the awareness of the four mentioned problems. All of that to let two persons from two different cultures sitting with each other and knowing each other better. This chair can exist everywhere, for instance, schools, universities, municipals, public areas, etc. And it’s for everybody in general and for the places that facing cultural clashing in specific.

We communicate as humans in different ways. The most common way in communication is the unique language for each nation. There are also many ways that people are using in communication with each other for expressing themselves, for example, art, music, literature, poetry, and cinema. In addition to the communication between people, there are also some specific habits for each nation or group of people, for instance, eating, dressing, lifestyle, and much more. Based on these topics something is created by each nation called culture. We all know that culture is different between a nation and another and sometimes this difference will make problems. We have to face as human beings these problems and to let life goes smoothly for us and for the next generations.

For that purpose, I am trying as an artist to fill this gap by a movement I called Culturegraphy; in other words, a Utopian culture (the perfect culture) that fits all cultures to solve social problems in an artistic way. Culturegraphy is a movement for all nations, so my aim is to erase the borders between people, to break humans’ shells, and to defeat any fear from the others; in order to gather and to mix the best of any two struggling cultures around the world. These are my social aim, but also I have an artistic aim. The artistic aim is related to graphic design.

I am trying to let this field more open about other cultures in styles, typography, and languages. In other words, I have two goals of Culturegraphy. My first main goal is to give awareness of four social and psychological problems which are Xenophobia, Illusory superiority, racism, and typography phobia. After giving this awareness, I can present my place Culturegraphy that will fit all the cultures together. My second goal is to create and to show the beauty of mixing cultures in graphic design, by using more than one cultural style or language together in graphic design.

In Anthropology “culture” means the accumulated customs, techniques, learning, and wisdom of a particular social group which is learned rather than innate or genetic, and is repetitively passed on from the older members of that group to the newer ones, to allow for continuity of that body of knowledge and belief to preserve it over many generations of participants. Culture is in part passed along by being written down or preserved in some other symbolic, permanent form, but mostly be constant repetition and example, from parent to child, from mentor to audience; by direct imitation, explanation, and repetition until the newbies are doing it the same way. Of course, cultures can change too.

That happens whenever some new element is introduced into a cultural system. Or, whenever the new, up-and-coming generation decides to do things just a little bit differently than their elders did. I found this changing very healthy and should happen; because nowadays the world is kind of one big village and we have to solve these kinds of problems. Therefore, I thought of Culturegraphy. Almost every culture wants to be not open for other cultures, but (in my opinion) we have to resist this to make our life better.

Where did Culturegraphy come from?

Culturegraphy is based on my individual researches in revolt, survival, language and home themes that I did in my graphic design study for the last three years in ArtEZ. I discovered a lot of deep details. We are facing these details as social problems nowadays. The extension “-graphy” is a combining form denoting a process or form of drawing, writing, representing, recording, describing, etc., or an art or science concerned with such a process. Something like biography, choreography, geography, orthography, and photography.

From the word culture and from the extension “-graphy”, the name Culturegraphy has been created by me; in order to show the beauty of the mixing between cultures. Since I have eastern and western backgrounds and I saw and heard a lot for the last 5 years during my unusual travel. The unusual situation that I have is the running from the war in my country Syria. For that reason, I will discuss only two sides which are Middle Eastern (Arabic) culture and Western (European) culture. But, Culturegraphy is a non-profit social movement for the whole world and for any two cultures which are facing problems with each other.

Thanks for your blog, nice to read. Do not stop.